Lined up at the S&H wharf near the Galata Bridge for the all-day cruise up the Bosphorus and back with luncheon stop in village near the Black Sea. Think I read about S&H in Pamuk’s Memories and the City. 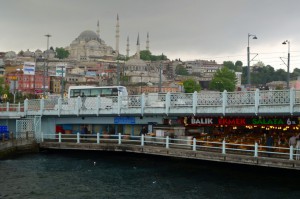 Galata Bridge, Sultanahmet side. New Mosque and Suleymaniye mosque beyond. All the guidebooks say you have to go there. You also have to have a grilled fish sandwich off a boat. We killed two birds with one stone: went into one of the busy restaurants on the lower deck of the bridge and had fish sandwiches there. Yuck! Never again! Paula couldn’t get the taste out of her mouth: “A bottom feeder.” 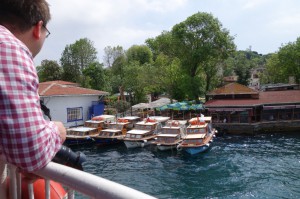 The boat was crowded. We had good seats on the lower stern deck but only got occasional sights of the passing parade.

There must be a better way to get to know the Bosphorus, of which Pamuk makes so much.

If the city speaks of defeat, destruction, deprivation, melancholy, and poverty, the Bosphorus sings of life, pleasure, and happiness. Istanbul draws its strength from the Bosphorus. …

For centuries, it was just a string of Greek fishing villages, but from the eighteenth century, when Ottoman worthies began building their summer homes … there arose an Ottoman culture that looked toward Istanbul to the exclusion of the rest of the world. The yalis (ya-luh, approx) — splendid waterside mansions built by the great Ottoman families during the eighteenth and nineteenth centuries — came to be seen, in the twentieth, with the advent of the Republic and Turkish nationalism, as models of an obsolete identity and architecture …” (Istanbul: Memories and the City, 47-49) 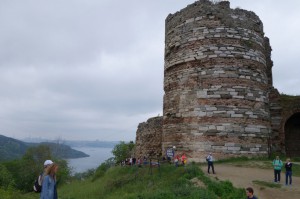 The castle ruins above Anadolu Kavagi (Kav-ay-yuh, sort of), last stop on the Bosphorus cruise. Views north to the Black Sea. Otherwise nothing special here. Dirty dirt. The longish climb did work up an appetite. We had a nice lunch after at a seaside restaurant.