Çeşme (Chesh’may) was a blast of sun after a week of cloud and rain. We aimed for Çeşme on a third-hand say-so. From Bergama you pretty well have to go through Izmir, a city of two million, which puts you on impossibly busy city streets linking with a superhighway to a narrow peninsula with resorty developments everywhere you turn.

We took in the yacht-friendly waterfront development while looking for a place. Settled on a nice room a block in from the water at the Antik Ridvan Otel for 85 lira, just over $40. We stayed two nights. The room came with a little balcony. 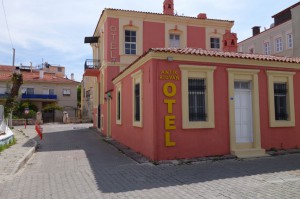 Nearby, on a busy street, was the base of the old castle … 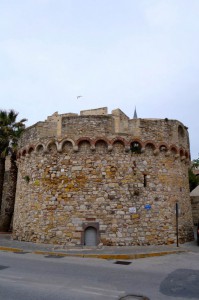 This 18th-century inscription on a fountain up the hill behind … 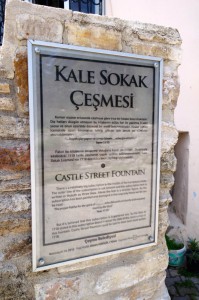 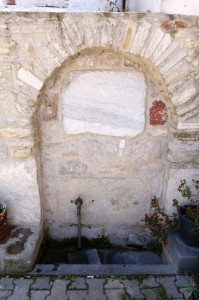 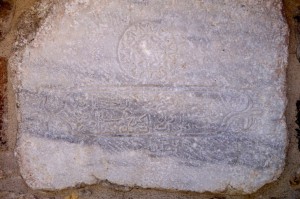 Quite easy to get lost in the concerto of hills and bays around Çeşme. Across the peninsula was a sunny suburb with a boatworks and many tony estates. We drove and walked around looking for the hot springs in the sea, a bit of local knowledge we picked up from a shopkeeper; the search was interesting in itself. 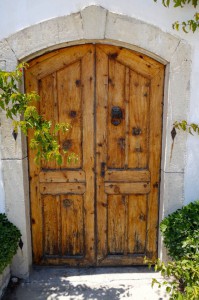 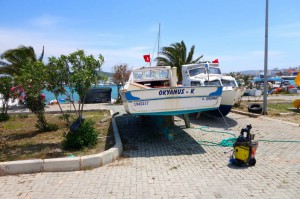 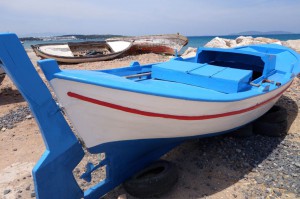 We identified a good restaurant on Çeşme‘s tourist walk from Lonely Planet Turkey — Imren Locantasi, open since 1960, with a Greek-style open kitchen in front and a bamboo-covered atrium in back. We had the moussaka and the lamb shanks, both unusual, delicious and cheap. We went back the second night.