Two overnighters and a brief stopover in our three-day drive from Kalkan to Ürgüp, Kapadokya, where a room awaited us.

First day we made for Side (See-day), east of Antalya. The Aegean and Mediterranean coasts are separated by a rugged mass of mountain and joined by a sometimes very thin road. Approaching Antalya you come out of the spectacular mountains in a rush of forest and yon distant craggy peak of Mount Olympos and onto a flat where the Turkish Riviera begins. Antalya is a city of nearly two million, in orange country, a giant orange in the roundabout; then there’s a 30-kilometre strip of development along the coast highway before you come to Side. Then your jaw drops. Side is one huge Roman ruins, mostly unrestored, with a touristic centre growing like a fungus amid the marble everywhere strewn. We went down a little side road and found a cheap room for the night, $50 or so, including breakfast, at the Neptune. It’s the gabled structure in this picture: 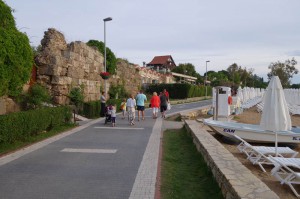 We dined in a restaurant beside this walk-way. Back along the coast towards Antalya, on the other side of the bay, just a kilometre away,  rose a riot of resorts, Cancun-style.

My lamb chops were excellent — the teeny ones with the long bones. Paula had the mese as always.

Mountain pass in the Western Taurus Mountains northeast of Antalya: 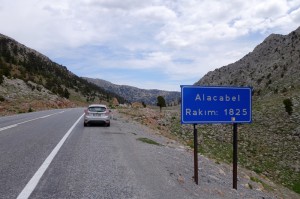 Konya was a big surprise — a teeming city of a million on a flat arid plain with a flourishing tourism trade around the Mevlana Museum, resting place of the scholar-sage-poet Rumi, more properly in Turkish Mevlana (= Our Master) Celâleddin Muhammed Rûmi (1207-1273) — his remains are here beside his family and followers. 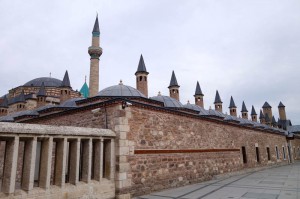 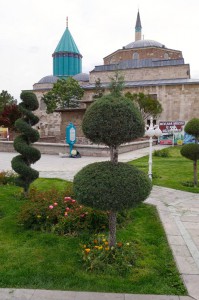 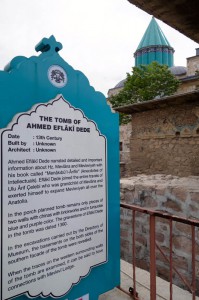 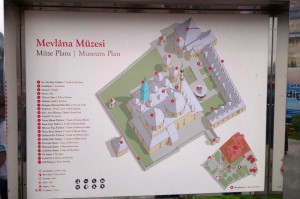 The heart of it was the crypt, where there are many dozens sarcophagi. No photos allowed; people took pictures anyway; but not me =sigh= The Wikipedia article on Rumi has a gallery of photos of the museum, including this stunner on Wikimedia Commons, by అహ్మద్ నిసార్ (name not translated) and titled “Maulana Rumi – Disciples:”

A crush of tourists mingled with the faithful. People were praying openly in front of the master’s turbe. I was not prepared for the deep reverence he commands as a spiritual leader. In another room believers stooped to kiss the amulet outside the vessel that holds a lock of Mohammed the Prophet’s hair. A women’s and families’ area was screened yet accessible to non-believers passing out of the museum/mosque. Don’t believe I’d ever seen Muslim women kneeling at prayer before.

In America, meanwhile, Rumi has been anointed the Greatest Poet Ever. (See “Why is Rumi the best-selling poet in the US?” by Jane Ciabattari, BBC Culture website.) In English Rumi’s love poetry reads very well, if a tad over the top …

A moment of happiness,
you and I sitting on the verandah,
apparently two, but one in soul, you and I.
We feel the flowing water of life here,
you and I, with the garden’s beauty
and the birds singing.
The stars will be watching us,
and we will show them
what it is to be a thin crescent moon.
You and I unselfed, will be together,
indifferent to idle speculation, you and I.
The parrots of heaven will be cracking sugar
as we laugh together, you and I.
In one form upon this earth,
and in another form in a timeless sweet land.

We found the Dervish Hotel (Top Choice in Lonely Planet Turkey), but it was full … except for, the nice cultured concierge added, a room in the old house … that would take a little fixing up. More than a little. The beds were grim, and it wasn’t cheap — but I don’t have the account statement in front of me … Thinking about $100 including an okay breakfast down in the windowless basement. Got a peek in a real room — gorgeous.

Entrance to the old house in back: 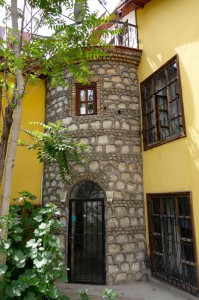 You then go through the laundry area. Old style bathroom in a closet (to R) 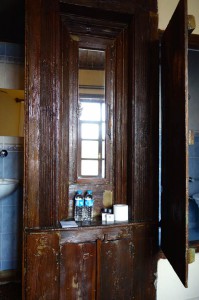 The view across the street from our window …

Worth the price of admission for the tea and conversation under an awning in the garden with a local rug dealer, brother of the proprietor, and an American woman, a retired California university librarian. She had been here many times and was mad keen on the Seljuk Turks.

The proprietor directed us to a restaurant across a busy intersection, past a walled graveyard, and across another busy street, but worth the effort — Konak Konya Mutfağı: regional cooking, plentiful and cheap, in a family-friendly setting, with little kids running around.

Konya was the ancient city of Ikónion (Greek) /Ikonium (Latin) that Saul of Tarsus, later St. Paul, visited twice circa 47-50 CE (“Konya,” Wikipedia). It was a capital city of the Seljuk empire of the 11th-14th centuries CE.

One of the Seljuks’ economic development projects was the caravanserai, part of the overland trade route between Italy and China. On our way east from Konya we stopped at the most famous caravan stop, at Sultanhanı: 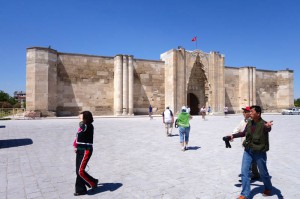 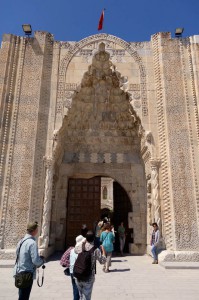 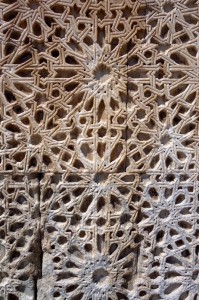 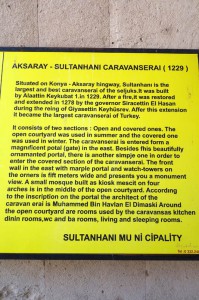 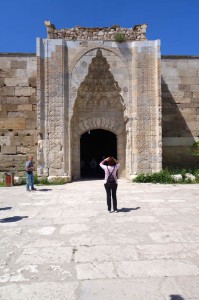 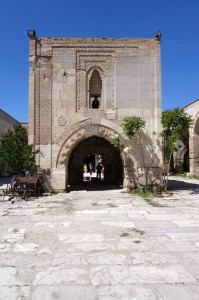 Across the street was another garden of leadership (Sekjuk, I think). Is it my morbid eye or do they look like severed heads? — 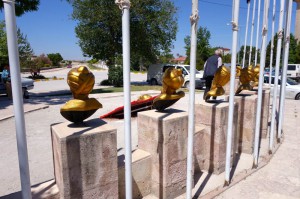 Sell your cleverness and buy bewilderment.

Rumi, Masnavi i Man’avi, the spiritual couplets of Maula. Quoted on Goodreads.